Five individual stakes winners spearheaded another successful year in 2021 for Archie and the team at Saxon Gate. They contributed to 78 winners on the Flat and All-Weather, supplemented by five more under National Hunt rules.

Five individual stakes winners spearheaded another successful year in 2021 for Archie and the team at Saxon Gate. They contributed to 78 winners on the Flat and All-Weather, supplemented by five more under National Hunt rules.

It was Apple Tree Stud’s iron grey filly SHERBET LEMON who set the ball rolling by winning the Listed Oaks Trial under Paul Mulrennan at Lingfield Park in May. Though she was unable to win again, she was sold to Highclere for 450,000 gns at the December Mares’ sale at Tattersalls in Newmarket.

Archie enjoyed two more high profile successes at the Cazoo Derby meeting at Epsom in early June, starting with Hambleton Racing’s MEHMENTO in the Listed Surrey Stakes. He dominated the seven-furlong feature under a fine ride by Hollie Doyle to confirm the promise of his second in the Group 3 Greenham Stakes at Newbury.

The following day PARENT’S PRAYER shared the headlines when she supplemented her success in a Listed race in Ireland in 2020 with Group 3 honours in the Princess Elizabeth Stakes. Like Mehmento, she made all the running, this time under a perfectly judged ride by champion-to-be Oisin Murphy.

The daughter of leading sire Kingman retired with an official rating of 105 and was sold to Japan at the end of the season for 540,000 euros at the Arqana Sales, completing a memorable year for her owner Ecurie Ama Zingteam.

Next to step into the limelight was Hambleton’s ultra-consistent stayer OUTBOX, who gained a deserved Listed success in the Fred Archer Stakes at Newmarket at the end of June, claiming a notable scalp in the process. Winning for the third time in 2021, he dug deep for Hollie to take the measure of St Leger winner Logician in the mile and a half feature.

Outbox got off the mark on the All-Weather at Wolverhampton before taking a conditions race at Doncaster’s opening Lincoln meeting, but he also gave his owners plenty of fun in defeat. He was second in the Group 3 John Smith’s Silver Cup at York in July and the valuable Group 3 Stockholm Cup at Bro Park in Sweden in September.

Archie also scored a notable stakes success for high profile owner Imad Alsagar with promising home-bred filly NAZANIN in the Group 3 Firth Of Clyde Fillies’ Stakes at Ayr’s Western Meeting in September. She got up to beat Canonized under Hollie in a driving finish and will now be aimed at a Classic trial in the spring.

Saxon Gate was represented at the very highest level by star sprinters GLEN SHIEL and DRAGON SYMBOL, who both ended the season with great credit despite finding Pattern success elusive. Hambleton’s star ‘Glen’ was second in the Diamond Jubilee Stakes at Royal Ascot and the Champions Sprint at Ascot, earning almost £275,000 for his proud owners, and will be back again in 2022.

Dragon Symbol was first past the post at Group 1 level, edging out American challenger Campanelle in a dramatic finish to the Commonwealth Cup, only to lose the race in the stewards’ room. Despite the disappointment of that verdict, Yoshiro Kubota’s colt went on to establish himself among the very best sprinters in Europe. He was placed in the July Cup, the King George at Goodwood, the Nunthorpe Stakes at York and the Flying Five at The Curragh in Ireland.

Success continued at domestic level throughout the year as Ontoawinner’s standard bearer CORINTHIA KNIGHT took his career tally to 14 with a Pontefract double and their SECRET HANDSHEIKH became our joint winning most horse with four successes, along with Mohammed Rashid’s equally prolific EXCEL POWER. Meanwhile, SOUTHERN VOYAGE – owned by one of our biggest supporters Clipper Logistics – and Hambleton’s ARCTIC EMPEROR both rattled up hat-tricks.

Meanwhile, Ben and Sir Martyn Arbib’s admirable dual-purpose performer STAG HORN excelled himself once again, winning the coveted Phil Bull Trophy at Pontefract in October for the second year running under Hollie before making a promising hurdling debut for Gavin Sheehan at Hereford in December.

He provided Archie and the team with one of five successes under the National Hunt code – a tally that also included Hambleton’s bumper winners ALAZWAR and GROVE ROAD.

It was particularly pleasing to contribute 46 winners to Hollie’s latest record-breaking tally (her next most for any trainer was 8 wins). Her strike rate for the yard on the Flat and All-Weather was an impressive 21 per cent. 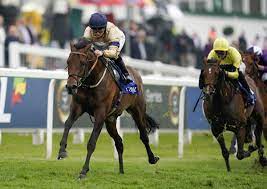