NAZANIN’S victory in the Group 3 Virgin Bet Firth Of Clyde Fillies’ Stakes at Ayr’s Western Meeting gave all the team at Saxon Gate a great thrill but was extra-special for owner-breeder Imad Alsagar.

The daughter of Declaration Of War, who was given a brilliant ride by our stable jockey Hollie Doyle, kept on strongly to win the six-furlong feature and may now step up in trip in a Classic trial in the spring. A full report of her Scottish success appears on this site.

The ever-reliable Outbox was on his travels again to earn another Group placing – this time in Sweden. Hambleton Racing’s son of Frankel was second to hot favourite Square De Luynes in the £80,000 Group 3 Stockholm Cup on turf at Bro Park.

He was in front three furlongs out under regular partner Hollie and kept on gamely after being headed by the Norwegian-trained winner. Just two weeks earlier Outbox had run another creditable race to be a close fourth in the Group 3 Unibet September Stakes at Kempton Park and will return to the All-Weather later in the year.

Stable stalwart Corinthia Knight, owned by Ontoawinner, was also in action at Bro Park, finishing a courageous fourth for Luke Morris in the Sprint Championship he won at the track in 2019. The performance took his career earnings beyond £350,000.

The Cool Silk Partnership’s Stone Soldier, who won three times on the All-Weather at Southwell for Archie last winter, also emerged with credit in Sweden, finishing a creditable fourth in a Listed race over a mile on dirt.

Another stable star Dragon Symbol ran yet another solid race in top company when he was beaten little more than a length into fourth in the Group 1 Derrinstown Stud Flying Five Stakes at The Curragh on 12th September. With champion jockey Oisin Murphy again in the saddle, our tough three-year-old held every chance deep inside the final furlong of a race that went to Ireland’s Romantic Proposal.

September got off to a strong start when the improving Southern Voyage won a mile and a half handicap at Thirsk for Clipper Logistics and Kieran Shoemark. It was the three-year-old colt’s third successive win after getting his head in front at Redcar and Ascot in the summer and set him up for a crack at the valuable Old Rowley Cup Handicap at Newmarket in early October.

Dark Terms got off the mark at the fifth attempt for her owners Apple Tree Stud in a Kempton handicap over six furlongs in mid-month. Confirming the promise of a fourth there following a short break, the daughter of Dark Angel stretched over three lengths clear for Hollie Doyle.

She was also on the consistent Secret Handsheikh (pictured above), who won for the fourth time this year when bolting up by four lengths in a six-furlong Yarmouth claimer the following day. It proved to be his swansong for Archie and owners Ontoawinner as he was claimed after the race for £10,000 by trainer John Gallagher.

September finished on a high when Hambleton Racing’s Kingman gelding Miquelon supplemented his Chepstow win in August with an authoritative display over a mile on the Lingfield Polytrack – a win he would build on in early October.

Then, on 27th September, Aunt Bethany scored at the third attempt in a seven-furlong Newcastle maiden. She kept on gamely for Hollie in the colours of Saeed Bin Mohammed Al Qassimi to win by a neck after being placed in her first two starts at Yarmouth and Salisbury. 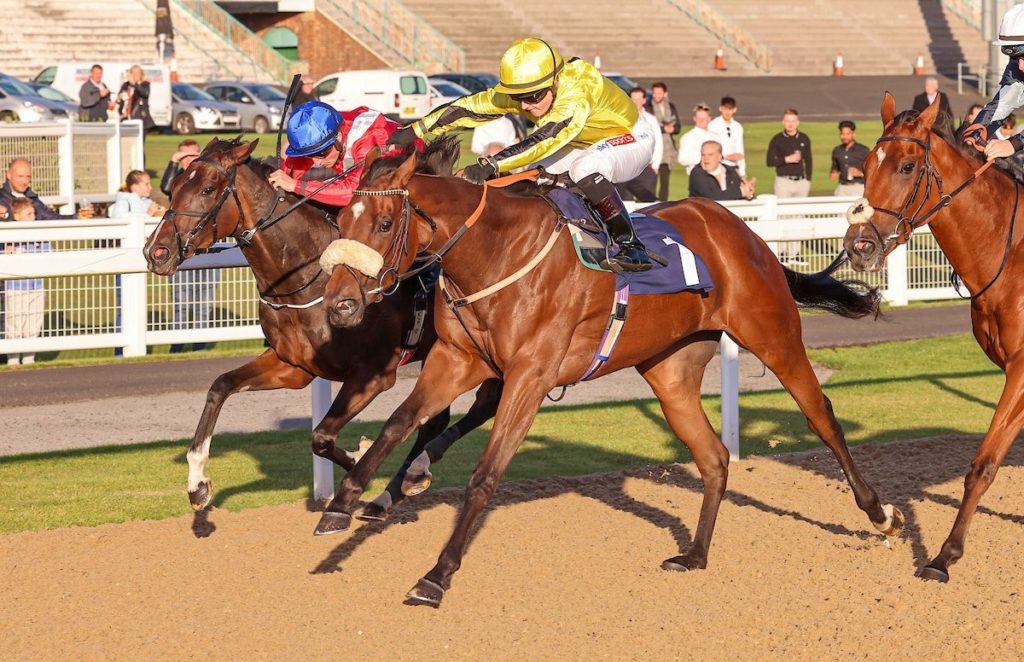