The success of EDDIE’S BOY, Manitou and Al Zaraqaan on an unforgettable international raid in mid-September was one of the highlights of the year at Saxon Gate.

The son of Havana Grey, who won the Super Sprint at Newbury and finished third in the Windsor Castle Stakes at Royal Ascot, recorded his third win of the season in pulling over six lengths clear of his nearest rival.

Then in Sweden 24 hours later, Hambleton Racing celebrated a remarkable double when Al Zaraqaan and Manitou were both victorious on Stockholm Cup Day at Bro Park. In fact, their globetrotter Outbox only just failed to make it a hat-trick when he finished second in the feature race for the second year running.

Al Zaraqaan confirmed the promise of his hurdles win at Newton Abbot by landing the H M Drottningens Pris in the hands of Gavin Sheehan, while Hollie flew from Paris to partner Manitou in a seven-furlong conditions race. A full report on the weekend’s successes appears on this web site.

Meanwhile, another Hambleton Racing star Tempus re-appeared in the Group 2 Joel Stakes at Newmarket on 23rd September following back-to-back wins in Groups 3s at Salisbury and in France and emerged with credit.

He found himself hemmed in against the rail following a slow start but finished with a flourish under Hollie when he eventually saw daylight. It was a performance promising enough for him to take his chance at the highest level in the Queen Elizabeth II Stakes on Champions Day at Ascot.

Also on her travels was Apple Tree Stud’s Dark Angel filly Heavenly Breath, a Kempton Park novice winner in August who secured some important black type when finishing second in the Group 3 Prix d’Aumale at Longchamp on 8th September. She led the mile feature, only to be headed inside the final furlong.

At Newcastle at the end of the month, Clipper Logistics’ four-year-old Southern Voyage bounced back to form to win an extended mile and a half handicap for Danny Tudhope, while Qatar Racing’s filly Electress got off to the perfect start for her new stable when she landed a 10-furlong Brighton handicap for Cieren Fallon at the beginning of the month. Previously trained by Ralph Beckett, the daughter of Galileo was dropping back in distance.

There was also a breakthrough success for The Cool Silk Partnerships’ Made Of Lir who won at the eighth time of asking in a six-furlong nursery on the Polytrack at Chelmsford City. It was certainly well deserved following a string of placed efforts at Brighton and Ffos Las.

At Haydock at the beginning of the month, the handsome Alazwar supplemented his two All-Weather wins by taking a mile handicap at Haydock Park for Hollie. He appeared to find slower ground against him when beaten at Goodwood on his next start.

Christopher Wright and Emily Asprey were celebrating when A Taste Of Honey returned from a break to win a seven-furlong Lingfield Park novice on 29th September. Second in a Doncaster maiden on debut, she was tough in the finish despite racing for the first time in over three months and emulated her dam by scoring on synthetics.

Another horse bred to be effective on the All-Weather, He’s A Monster scored a debut victory for Hollie at Chelmsford before showing plenty of early dash in the valuable Goffs Million at The Curragh just nine days later.

The jumpers were not to be outdone either as Throne Hall made a winning debut in a novice hurdle at Uttoxeter on 13th September, justifying his short price for Gavin Sheehan. Then, just three days later Nifty Getaway proved too good for her rivals under Gavin in a mares’ novice hurdle at Newton Abbot. 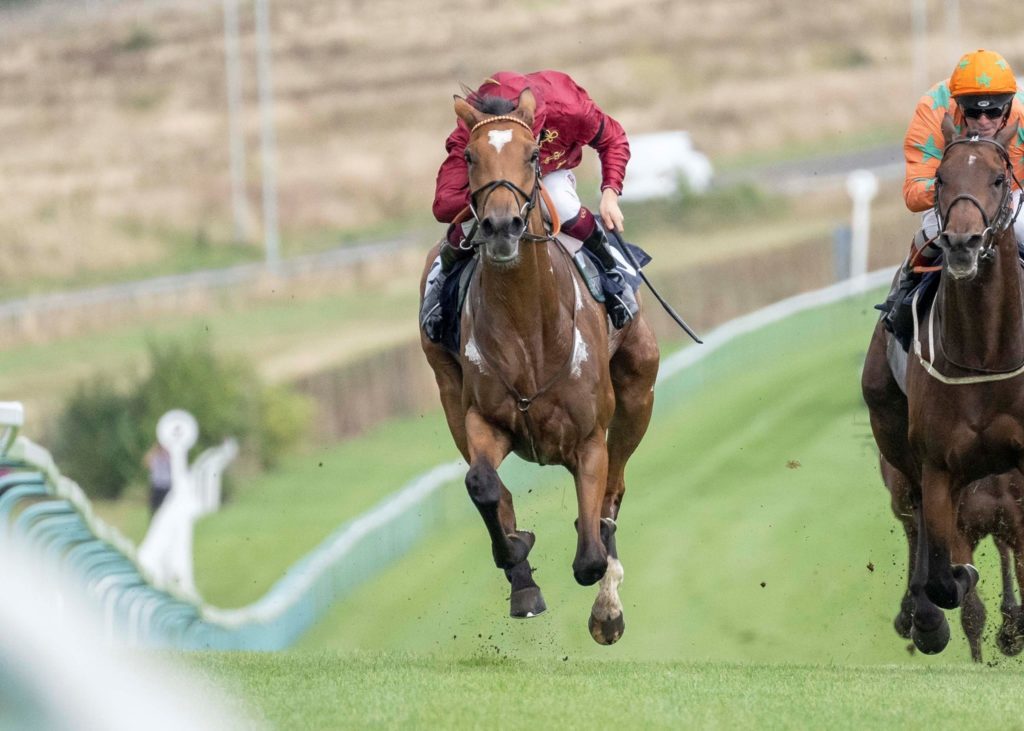