Our impressive Royal Ascot winner BRADSELL is set to step up to the highest level in the Group 1 Keeneland Phoenix Stakes in Ireland later this summer.

Brilliant under Hollie Doyle in the Group 2 Coventry Stakes, our son of Tasleet holds an entry in the big juvenile feature over six furlongs at The Curragh on Saturday 6th August.

His victory in a strong renewal at the Royal Meeting was executed in a fast time, delighting his trainer. “He was brilliant and Hollie gave him a fantastic ride. I knew when he won by nine lengths on his debut win at York that he was very smart – two-year-olds just don’t win like that,” said Archie.

“But he confirmed that promise against the best of his generation in the Coventry and I’m very excited about what the future might hold for him now. I’m particularly thrilled for his new Bahrain-based owners Victorious Racing, who bought him after his York win.

“But much of the credit must go to Tom Biggs of Blandford Bloodstock who is an absolute genius. He has found so many good horses for us for relatively cheap prices and bought Bradsell for just 47,000gns at the Goffs breeze-ups in April,” adds Archie.

Hollie was also full of praise for the unbeaten colt but confessed she was concerned about his starting position over on the far side in stall two.

“I was ever so worried throughout that I was on the wrong side to be honest,” she said. “However, once I got into a handy position on the girths of them, I knew the further I went, the better I would go.

“He really turns it on at the track. I gave him a squeeze two down and he responded really well. I wasn’t too worried when I committed a long way from home as I knew he would keep galloping to the line.

“He actually hit the line so hard and I struggled to pull him up afterwards. Off the back of that performance, the world is his oyster,” she exclaimed.

Bradsell was always keeping the previously unbeaten Brocklesby winner Persian Force at bay, doing so by a length and a half with a neck further back to Paul and Ollie’s Cole’s Royal Scotsman in third. Aidan O’Brien’s favourite Blackbeard was only fifth.

Hollie’s success was her third at Royal Ascot and established her in the record books as the winning most female rider at the meeting, but her record breaking didn’t end in the Coventry.

She rounded off an unforgettable week by becoming the first female jockey to win a Classic when galvanising John and Thady Gosden’s filly Nashwa to glory in the French Oaks, the Prix de Diane Longines at Chantilly.

Archie and the team are delighted to see her record yet another important first and also extend our congratulations to Nashwa’s owner-breeder Imad Alsagar and his Blue Diamond Stud. 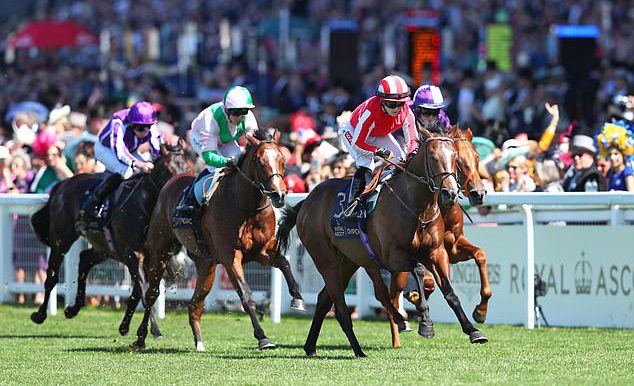