June was an unforgettable month for Archie – on and off the track. His brilliant two-year-old BRADSELL won the Coventry Stakes at Royal Ascot just a few days before the Saxon Gate trainer married his fiancée Brodie Hampson.

Bradsell’s victory under Hollie Doyle in the Group 2 feature is documented in detail on this site and sets him up for a likely re-appearance in the Group 1 Keeneland Phoenix Stakes in Ireland in August.

However, he wasn’t the only Saxon Gate runner to emerge with great credit at the Royal Meeting, as both Tempus and Eddie’s Boy gave their syndicate owners a day to remember.

Hambleton Racing’s Tempus stuck to his task gamely to be third in the Royal Hunt Cup while two-year-old Eddie’s Boy had Middleham Park’s owners celebrating after finishing third in the Listed Windsor Castle Stakes.

Tempus was less than two lengths behind Dark Shift in the famous mile handicap following seconds in two Listed races on turf this season. Meanwhile, Eddie’s Boy held every chance in the Windsor Castle, finishing just two lengths behind Aidan O’Brien’s Little Big Bear. Both horses were partnered by Hollie.

Hambleton enjoyed further success when Twelfth Knight won a Windsor handicap to supplement his earlier success at Yarmouth. James Doyle had the three-year-old in the front rank throughout to defy a 3lb rise in the ratings.

Tough sprinter Corinthia Knight has been a stable stalwart at Saxon Gate and took his win tally to a remarkable 15 when winning for the fourth time at Pontefract in early June, with Hollie again in the saddle. Ontoawinner’s star stuck on gamely to defy a welter burden of 10st 3lb at the West Yorkshire track.

Corinthia Knight wasn’t the only Ontoawinner horse to visit the winner’s enclosure in June, however, as their filly Amor De Mi Vida took a five-furlong fillies’ race at Yarmouth just a week after her creditable second at Newmarket.

Another sprint handicapper in the headlines was the Cool Silk Partnership’s Dusky Prince, who returned to form in the blinkers at Wolverhampton on 20th and repeated the feat the following week under a 6lb penalty with a resounding success for Hollie at Windsor.

Emperor Spirit ran on strongly to be second in the six-furlong feature handicap at Ripon during Royal Ascot week – a highly creditable performance as the winner Justanotherbottle lowered the track record.

That effort followed a win over the same distance on the All-Weather at Chelmsford City on 2nd June in the colours of proud owner Abdullatif M Al-Abdulrazzaq – a result that completed an across-the-card treble for the team.

In the same ownership, Misscall posted a notable success at Newmarket for leading French jockey Mickael Barzalona. She dug deep to repel the runner-up Commandment in a six-furlong fillies’ handicap.

Tahani, owned by Overbury Stallions, broke her maiden under Hollie on handicap debut at the same track while two-year-old Edgar Linton impressed in a Redcar novice. Completing a double for Danny Tudhope, the £55,000 son of Mehmas – named after a character in Emily Brontë’s classic novel Wuthering Heights – was a notable scorer for owners the Bronte Collection.

Also in top form was Jan Hampson’s three-year-old filly Susanbequick, who broke her duck in a mile handicap at Lingfield Park at the beginning of the month, this time in the hands of Hector Crouch.

Finally, Jonny’s Allison’s Throne Hall produced a courageous performance to be second in one of the season’s most prestigious amateur riders’ races, the Queen Mother Cup at York on 11th June. Giving significant weight to the winner, he only just failed to claim the glory under a fine ride by Brodie. 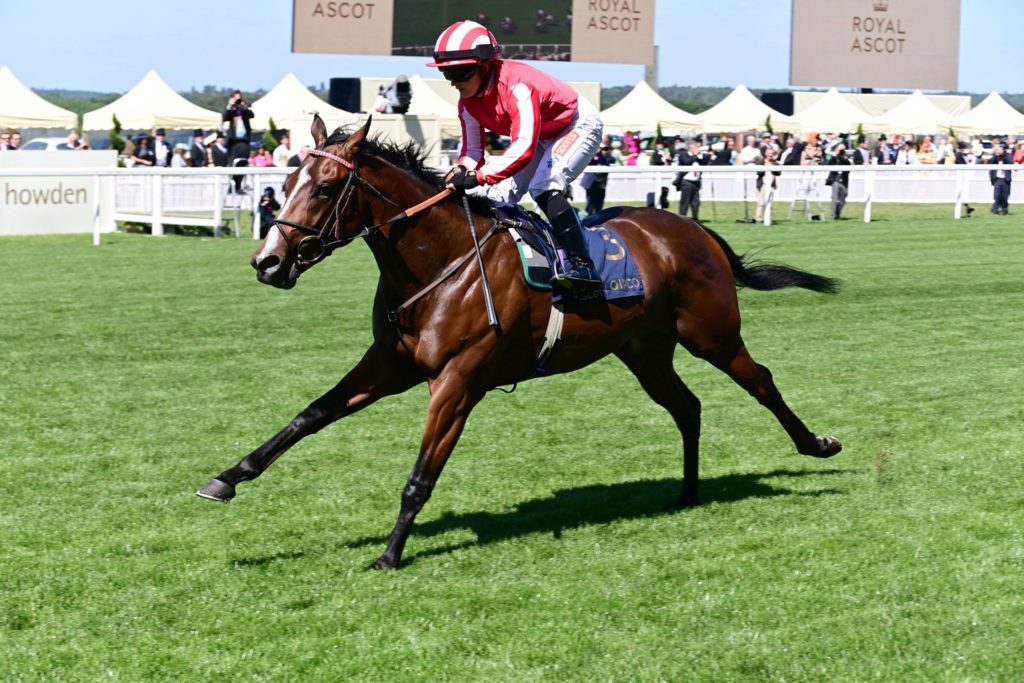