So Close To A Big Race Treble In A Memorable July

Archie and the team came within an ace of completing a big race treble in July following the storming successes of EDDIE’S BOY in the Super Sprint at Newbury and Tempus in a valuable handicap at Ascot.

The gallant Tabdeed failed by only a short-head to land the £250,000 Coral Stewards’ Cup at the Qatar Goodwood Festival on Saturday 30th to round-off another memorable month at Saxon Gate.

Eddie’s Boy played the starring role by making all the running against the stands rail in the £200,000 juvenile cavalry charge at Newbury under a determined Hollie Doyle, who reached her half-century that day in record time and also enjoyed a month to remember.

The combination went on to finish a respectable fourth to the impressive Trillium in the Group 3 Molecomb Stakes at Goodwood, where Hollie became the first female rider to win the Group 1 Qatar Nassau Stakes on her Classic heroine Nashwa.

She did follow up her Newbury victory for Archie a week later, however, when she galvanised Tempus to a dominant success in the mile Porsche Handicap on King George Day at Ascot. Hambleton Racing’s star deserved his victory after finishing third in the Royal Hunt Cup over course and distance the previous month.

Tabdeed was out of luck in a five-furlong sprint handicap there on his previous start but it was a different story at Goodwood where only last year’s winner Commanche Falls could deny our duo the glory in the Stewards’ Cup.

The lightly raced seven-year-old clearly appreciated the return to six furlongs and was, in fact, a shade unlucky as he had to switch twice at a crucial stage of the race. He now has big handicaps like the Portland at Doncaster and the Ayr Gold Cup on his agenda.

Meanwhile, our stable stalwart Corinthia Knight enhanced his growing reputation as a track specialist at Pontefract by taking his tally at the West Yorkshire track to five under Paul Melrennan on 24th July – a brave front-running victory that was supplemented at the same track in early August.

Ontoawinner’s sprinter wasn’t our only winner that Sunday, however, as Hollie landed a six-furlong maiden on the Chelmsford City Polytrack on The Bullion Bomber for Tabdeed’s owners Lone Star Investments. He quickly bounced back from a disappointing debut at Ascot on what proved to be unsuitably fast ground.

The familiar yellow and white colours of Ontoawinner were in the winner’s enclosure again mid-month when the consistent filly Amor De Mi Vida scored at Haydock Park for Paul Mulrennan. It was her second five-furlong win of the campaign following success at Yarmouth in June.

Another double was a achieved earlier in the month when both Clifftop Heaven and Dusky Prince obliged at Doncaster. Juxtaposition Records’ Clifftop Heaven won a two-mile amateur riders’ handicap under Brodie Hampson before The Cool Silk Partnership struck in a five-furlong dash with their in-form sprinter, ridden by talented young apprentice Harry Davies.

That wasn’t Brodie’s only victory in July as she rounded off the month by taking a 1m handicap at Salisbury on Marco Polo’s Only The Brave, who stayed on strongly to win by three parts of a length. It was the six-year-old mare’s first win for the stable.

Syndicate-owned horses flew the Saxon Gate flag at the beginning of the month with Hambleton Racing’s Noble Anthem defying a mark of 85 on his handicap debut over 10 furlongs at Ayr for Mulrennan. He has since been gelded.

That was supplemented by Bruno’s Gold who scored his second win in only four starts when he took a 10-furlong handicap at the Scottish track the following week. Middleham Park’s three-year-old was returning from a short break having had a similar appointment with the vet.

Finally, it was exciting to greet new recruit Albasheer following his 130,000gns purchase at Tattersalls in Newmarket by Tom Biggs for owners Taylor’s Bloodstock. Shadwell’s lightly raced son of Shamardal won a Doncaster novice on debut for Owen Burrows before finishing second there in the Group 2 Champagne Stakes in 2020. 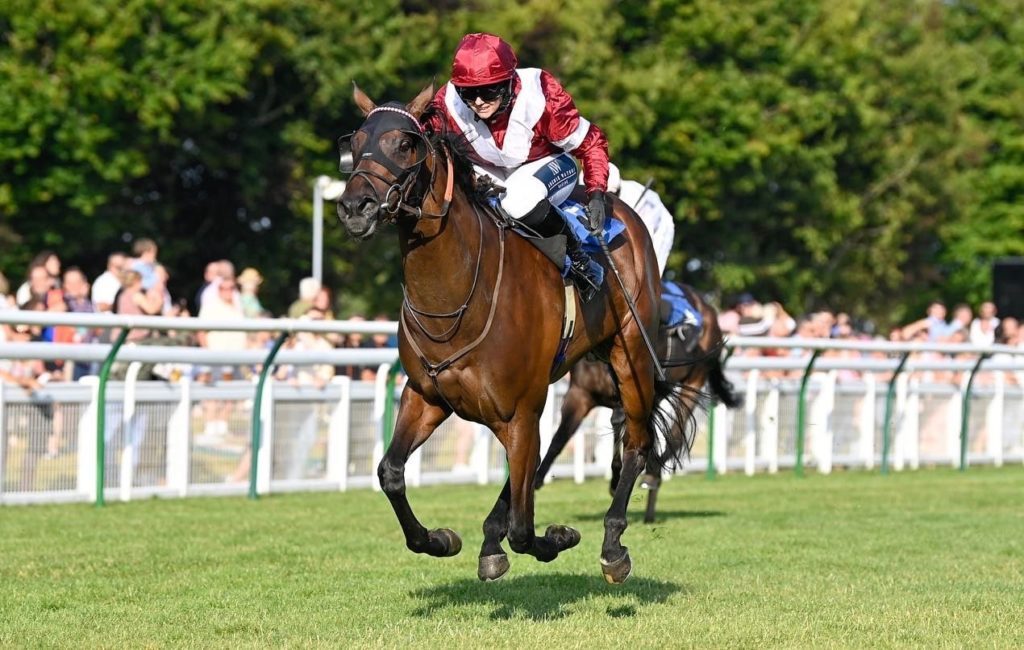 Only The Brave winning at Salisbury under Brodie Hampson